US Department of Defense (Conference in Hanoi, August 2007) informed that the Phu Cat Airbase was used during
the operation “Ranch Hand” from June 1968 to May 1970. Main activities undertaken at the airbase included: receiving of fuels, storing and loading of herbicides to aircrafts, and washing of the aircrafts after spraying. The quantity of herbicides used at the Phu Cat Airbase was reported to be 17,000 barrels of Agent Orange, 9,000 barrels of Agent White and 2,900 barrels of Agent Blue. Herbicides were transported by ship to Quy Nhon port, and then by truck to the Phu Cat Airbase. There was considerable spillage of herbicides during storage and use. In addition, used barrels with remaining chemicals were brought to residential areas by soldiers, and were used for various domestic purposes. The dioxin-contaminated area in the Phu Cat Airbase includes the former storage area, the former loading area, and the former washing area, etc. Over time, the chemical contamination has spread to the perimeter areas of the airbase

In Phu cat airbase, the contamination was divided into 4 zones: The storage area (Z3), the buffer zone, the sedimentation zone and Z9 (the southeast and southwest area). The total excavated volume of contaminated soil (5,400m3) was landfilled in a semi-subsurface area with covered with a cap. The landfill design was following all technical requirements of hazardous waste landfill. Especially, the landfill option was selected because it is a low cost solution, compared with other solutions and in the meantime, it still helps prevent dioxin exposure to human and environment.

The landfill is far away from residential area. It was built on an area of 5,600m2 and on an elevation of 30m. The landfill is on the northeast direction to the airbase and about 60m away from internal road. The Center for Environmental Remediation (under Chemical command- MND) was design contractor. Tri Viet and its partner was construction contractor for this landfill. The work that Triviet and its partner performed included not only construction of the lanfdill but also excavation of contaminated materials, hauling to the landfill, compaction and covering the landfill. The completion of this landfill in August 2012 helps remove Phucat airbase out of the list of dioxin contamination hotspot in Vietnam. 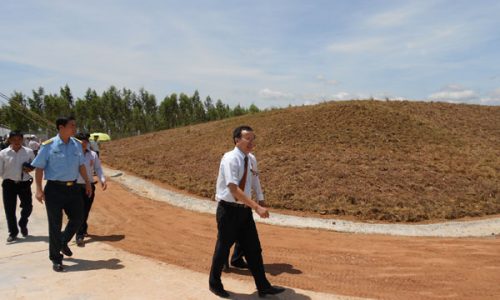 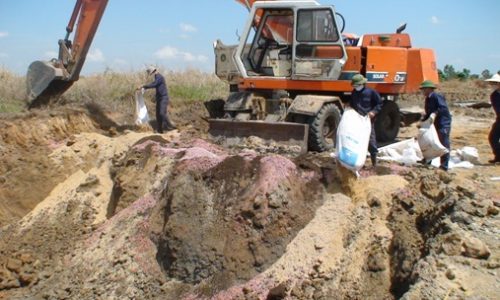